Posted on October 23, 2012 by ruffinontheroad

I was hoping that brief segments of this trip would be borderline decadent; my week in Florence with the McCullaghs probably qualified and so did my recent return to Tuscany, at least gastronomically. Tom and Peggy Briggs and I were honored to be the guest of Ricky and Nancy Richardson, old friends from college; Tom, Ricky and I were fraternity brothers.  As I mentioned in a previous post the

Richardsons were supposed to have been on the sailing trip in Croatia but Ricky suffered severe burns in June when he incurred the wrath of a stone pizza oven, and he has to avoid sunlight for a while. He has some nasty patches on his forearms from adopting a fighter’s stance again the fireball, but as you can see from the picture his face is 100% healed and he looks 32 again.

The Richardsons have fractional ownership in a beautiful home in a development called Castello di Casole. Development is hardly the right word. It is a sprawling 4,200-acre estate of vineyards and olive groves where Bronze Age settlements date to 3000 B.C. The hotel that serves as the estate’s centerpiece and overlooks the property is a castle from the 10th century that was renovated in the 18th.

The property was acquired by Colorado-based Timbers Resorts in 2005, and the company is gradually adding villas around the hotel and renovating a select number of the old farmhouses and stables on the property into

magnificent homes. It is spectacular, and as long as the government remains as opposed to development as it has been recently, it’s difficult to imagine anything else quite like this. (Check out www.castellodicasole.com and for more information contact the lovely Jennifer Young at jyoung@castellodicasole.com.)

The Richardson’s home, Pulcinello, sits on a hillside just below the town of Mensano. In Tuscany, it seems that every hill of substance has a medieval town on top of it, with newer homes and shops and offices just below and gorgeous rolling hills of vineyards and other agriculture in the valleys between. Mensano is small and usually quiet. “Nancy and I will walk up here for dinner,” Ricky said, “and often we’re the only people on the street.” That wasn’t the case on the day we arrived. 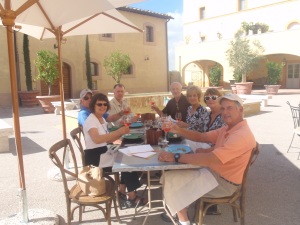 We got there for the final stages of Festa Della Vendemmia, a weekend celebration that happens only once every two years. For a small fee you get a glass and stroll through town sampling local wines, which is great fun, and the place was just rocking, wall-to-wall people. Ricky is a gregarious lad who seems to know everyone, and many people who hadn’t seen him since his accident were so happy to run into him, touching his face, elated at his recovery.

And that was the week, basically: driving through breathtaking countryside; walking the streets of fascinating

old cities and towns; wine, food and friendship, in ample doses. We had amazing pizza at La Pergola, in Radicondoli. We had a very special evening at the home of a wonderful, hardworking guy named Varno, who makes outstanding wine, runs an agricultural-themed B&B, and on rare occasions cooks for his friends. Ricky is a friend.

We had lunch in Panzano, home of Dario Ceccini, Italy’s most famous butcher and a huge television personality; the day we went to his shop he was holding court for a group of Norwegian tourists. His American wife translated for him, but one joke he managed in English. “Today’s question” he said, holding up a huge piece of meat, “To beef, or not

to beef.” The following day Tom, Peggy and I drove to San Gimignano, famous for its many medieval towers that make it look like a massive Stonehenge from a distance.

We spent a rainy afternoon in Siena; there is a great cathedral there, nice shops and we had yet another terrific lunch, but the most interesting thing about Siena is the huge Piazza del Campo, where twice each summer they hold a horse race called Il Palio. It dates from the Middle Ages when bullfighting, boxing and other games were held in the Piazza. When the Grand Duke of Tuscany outlawed bullfighting they started racing buffalo, then donkeys, and finally horses, with the “modern” Palio starting in 1656.

A thick layer of dirt is brought in to cover the perimeter of the piazza (the gray part in the photo), they pack 40,000 people in the middle, and the ten horses representing 10 of the 17 contrades, or city wards, run three laps of a dangerous course that rises and descends and features a couple of 90-degree turns. Horses are selected in a lottery that may or may not be rigged. Contrades will do anything to keep their rivals from winning, and bribes and doping are rampant. But the real fun starts with the race, as jockeys can whip other horses and hit other riders, and they often fall off since they are riding bareback, but it doesn’t matter, the horse crossing the line first wins even if it is jockeyless. It sounds like 90 seconds of mayhem in the middle of a rollicking good party.

On our final day there we visited Fontodi, one of the better local wineries. The harvest had ended just the previous day and everyone was suitably relaxed. The Chianti that is produced in Tuscany is made primarily from a grape

called Sangiovese, and it is so much better than I remember from the past, when it came in those squatty, straw-covered bottles called fiascos that always ended up as candle holders. In quality and certainly value, the wines we had in Italy compare favorably with any.

So that was Tuscany. As I said, borderline decadent, but 100% fantastic, thanks to the Richardsons.

One thought on “Return to Tuscany”