One Day in Kathmandu

Posted on February 2, 2013 by ruffinontheroad

Not more than 20 minutes into the Jet Airways flight from New Delhi to Kathmandu, attendants came down the aisle with complimentary cans of Tiger Beer. I’ve been offered water or tea immediately after takeoff but this was a first. After the beer I shut my eyes for a few moments. At a sudden jolt of turbulence I instinctively looked out the window and there, in the distance to the north, were the biggest, most dramatic mountains I’d ever seen. The two

A typical street in Thamel

tallest peaks were fairly close together, with a V shaped notch between them. I have no idea if they were Everest and Lhotse, probably not, but no one is going to tell me differently. (Sign at the Kathmandu airport: “Welcome to Nepal, home of the world’s tallest mountain and the world’s shortest person.”)

At the hotel I was met by Melanie and Linn, who work for Projects Abroad, the volunteer organization I was registered with. They confirmed that there is no heat and that power is rationed on a schedule that depends on what part of the city you are in; it goes off for two seven-hour segments each day. It’s worse this time of year because all power is hydro generated and this is the dry season.

Our hotel was in Thamel, the tourist section of Kathmandu. The narrow streets are covered by a canopy of wires

and cables, and you have to wonder how much of the limited power they generate is lost in this seemingly random latticework of electrical chaos. The streets are lined with restaurants and bars, Internet cafes, money exchanges, Ncell phone stores, trekking and outdoor shops and adventure tour storefronts.

The first night was an adjustment, to both the cold – there is no heat anywhere, even in the nice hotels, and it was probably in the low 30s at night – and to the noise. Somewhere in the vicinity of our hotel – it seemed like right outside my first-floor window – was a club with live and very loud Nepali music that went from eight until midnight.

I needed a requisite tourist experience during my one full day in Kathmandu and the next morning went to visit the Monkey Temple, a famous Kathmandu landmark. It was a good 20-minute haul via a bicycle rickshaw, but my guy Hari was up to the task, and when we arrived he parked the bike and we started up a long and steep stairway together. 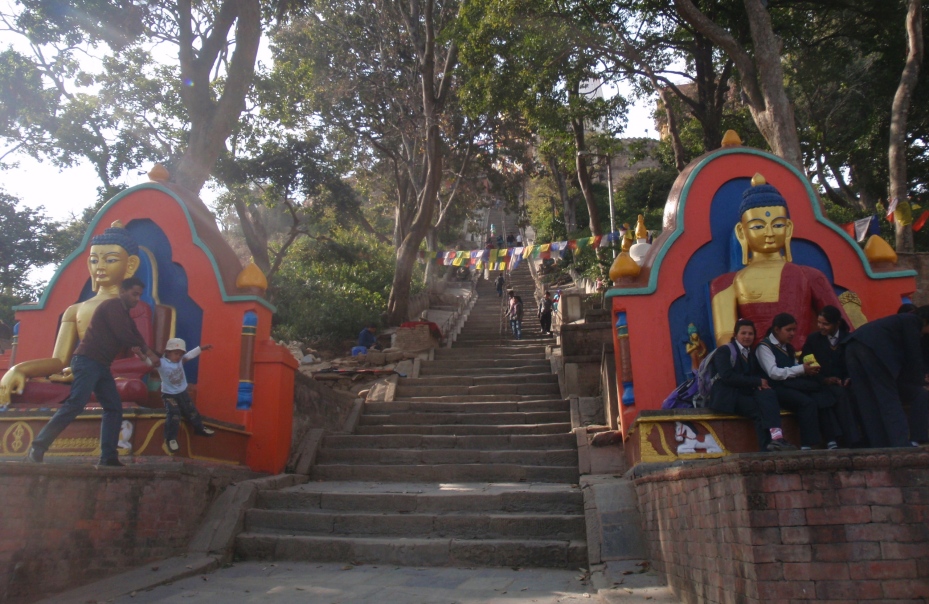 The first of the 365 steps to the Monkey Temple.

I stopped to take a picture and was set upon by a teenager. “Hello, where you from, U.S.? Washington, D.C., very nice city. Obama the president.” I assumed he knew the capital of every country that supplied tourists to Nepal. “You know how many steps up to the temple? Three hundred sixty-five. One for each day in the year.”

His name was Su-san – sue-SAN – and he seemed to know a lot about the place. He said that the temple was 2500 years old, which Wikipedia later confirmed. The valley had once been a big lake but this hill rose out of it and the temple was built to look down on the growing city below. You arrive at the top to the white dome of the “stupa”, with giant Buddha eyes that squint out over the valley. The temple is actually called Swayambhunath (Tibetan for “sublime trees”), but the resident monkeys are thought to be holy so that is how it is known. Legend has it that Manjushree, the bodhisattva of wisdom and learning who lived on the hill, grew his hair too long and developed head lice that transformed into the monkeys. 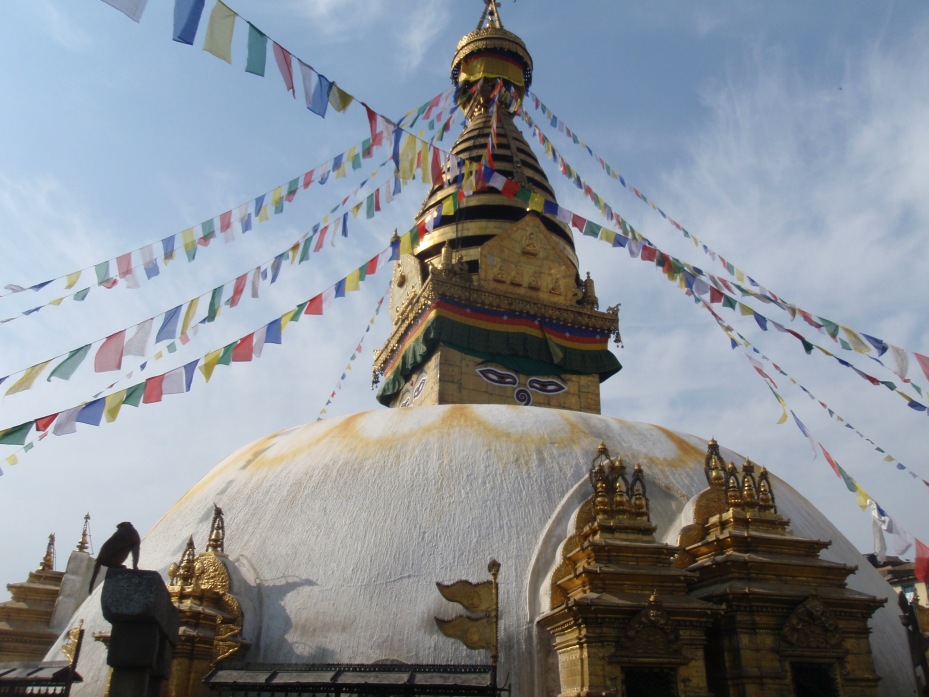 The eyes of Buddha look out over the Kathmandu Valley.

The stupa was surrounded by an iconic Nepalese symbol: prayer wheels. At this site alone there must be several thousand, of different sizes, all with the same Buddhist prayer engraved on them. You walk clockwise along the prayer wheels and spin them the same direction. The world can never end, so it is believed, as long as one prayer wheel is spinning somewhere, and to spin one counterclockwise guarantees bad luck. 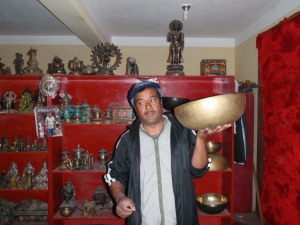 Once past the stupa the hilltop opens up into a surprising complex of temples and monasteries, shops and sidewalk vendors. We saw many red-robed monks talking or meditating. Su-san took me to a place that features the singing bowls that are sold everywhere in various sizes, and which are supposed to have healing powers. Chandra, the owner of the shop (and probably Su-san’s uncle) did the bowl thing on me, and it was hypnotic. Standing rigid with my eyes closed he banged the bowl with a muted mallet and held it close to my chest; my entire body vibrated, and the sensation in my head was intoxicating. He moved it up and down my body as it continued to ring and vibrate. Then he used a smaller bowl on my lower back and a smaller one still on my knee. He wanted me to buy a bowl but I just tipped him and we went on our way, to the second and third portions of the complex, which were not as interesting.

I walked back to the main gate with Hari, Su-san and his buddy, Sunil, who had mysteriously materialized. The two kids were both 16 and in high school. They claimed they were doing well, working hard. 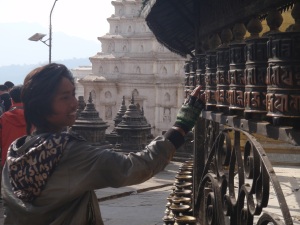 Their English was outstanding and I asked if they knew any other languages. They both spoke fluent Spanish, which they demonstrated, and are working on Italian and French. Impressive.

“If you’re going to be a tour guide,” I said to Su-san, “you’ll need to learn Japanese.”

I then asked how much he wanted for his time, and that’s when the scam began. “No money. If you pay me money he will just come and take it.”

“The man who is watching us. He will take the money and use it for drugs. So maybe you just buy me some milk. I have a brother who is just two years old, and he needs milk. And maybe some biscuits.”

We got to the grocery store and before I knew it there were four large boxes of powdered milk on the counter and three large packages of biscuits for a total of 3800 Nepalese rupees, maybe $45 and about ten times what I was prepared to give him. “Put it all back,” I said when I saw the total.

He pouted and I gave in to one box of each, which he probably returned immediately after I left, kicking back 10% to the shopkeeper. I was certain there was no man to steal his money and probably no younger brother, but he ended up with more than I’d have given him in cash and I had to admire his creativity. He even left me his phone number. “Call me, I will show you other temples.” The kid is going to go far.

That evening I went to find the source of the music near the hotel, and at that volume it wasn’t difficult, just

My driver Hari, after a job well done and a pretty good tip.

around a couple of alleyway corners and through a curtain. The club was one large room with many leather chairs and couches, a sizable dance floor in front of the three-tiered stage, and a small bar. This early there were only half a dozen patrons and maybe as many staff, and they were all clearly surprised to see someone as pale as I am walk through the door.

The band consisted of four musicians, all seated cross-legged on the back two levels of the stage. One played an instrument that appeared to be a horizontal accordion, and he was very good. A second used drumsticks to beat notes on an electronic panel. The other two were percussionists, and the four of them were actually a tight little unit who were compromised by the two female singers who warbled and shrieked into microphones at an ear-splitting, Spinal Tap (11) decibel level. “For this you need a dance floor?” was my first thought. My second was: Finish the beer and get out of there; it may have been mildly aggravating in the hotel room, but live it was unbearable.

So I went back to the room and listened to something a bit more suited to my western ear: Bob Seger, singing … well, what else would it be?

3 thoughts on “One Day in Kathmandu”