The Beautiful Faces of Surya Vinayak

Posted on February 11, 2013 by ruffinontheroad

Yes, Nepal has a completely different calendar from the rest of the world, just one of the many things I learned from the students at Surya Vinayak English Secondary School. It will be 2070 here in the middle of April, the Nepalese New Year. 2013 happened fifty-seven years ago and I am frantically searching for someone who can tell me the score of the next ten Super Bowls. 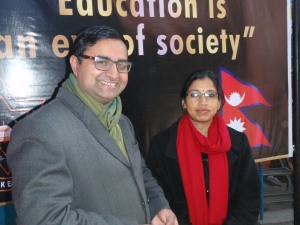 For two weeks I lived and worked at the school under the guidance of Bina Panday Kaphle and Suresh Kaphle, who own and manage Surya Vinayak and fight the good fight against the economic tide, Nepalese politics and corruption, and the fast-rising rents in the rapidly growing Kathmandu suburb of Bhaktapur.

Suresh left home at age 16 and came to Kathmandu where he quickly got a job in a school, and he eventually also opened a small vegetable shop with his brother. He would get on his bicycle each morning at 2 a.m., ride for an hour to buy vegetables wholesale, ride the hour return trip and open the shop by 4:30.

In 1999 the previous owner of Surya Vinayak, a customer in his shop, had potential buyers for the school back out at the 11th hour, and she asked Suresh to come manage the place for three months. At the time there were six kindergarten students and a host of financial and other problems. After three months there were 19 students and fewer problems. Suresh made a deal to purchase the

Aidan Witts and Will Fooks

school with the dream of it being private but still open to everyone. Bina gave up her career as a clinical psychologist to take over as principal. “We have the same dream,” says Suresh. And they have passed up a much easier life with relatives in Canada to pursue it.

They were only permitted by the government to add one class per year, so it took them ten years to get to grade 10, where they remain today; students go elsewhere for their final two years of high school (the government would charge them 500,000 Nepalese rupees to add the last two grades). The school has almost 300 students now, ages 2 to 16. Sixty-seven of the students are on “scholarship”, and ten of them live in a house adjacent to the school along with Bina and Suresh and their daughter, Subi, and, for a time, me and fellow volunteers Will Fooks (18, from England) and Aidan Witts (21, from Australia). 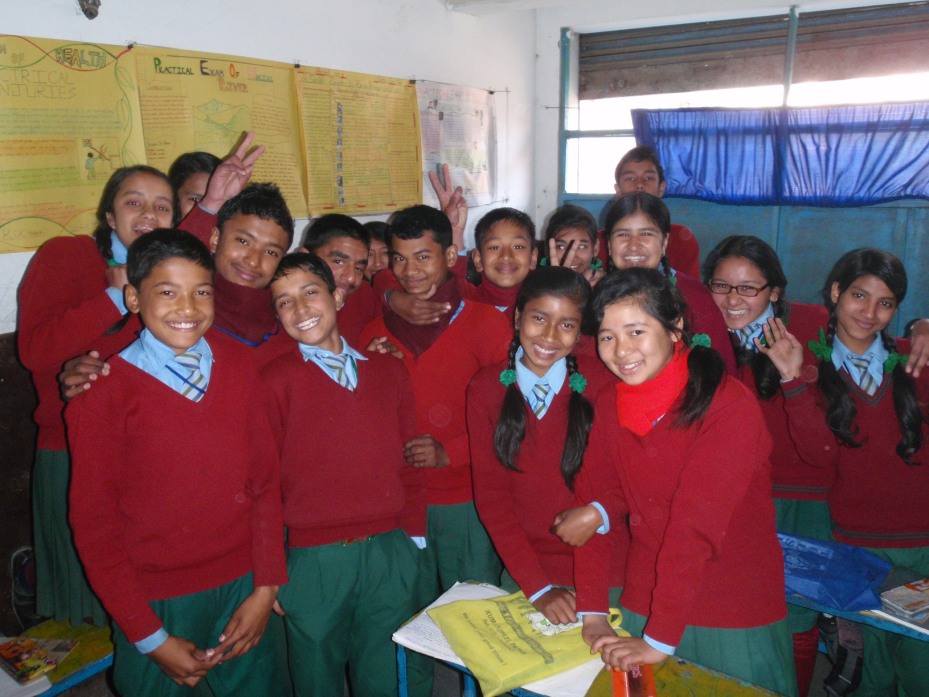 Suresh’s primary job now is traveling the district on behalf of Cerebral Palsy – he has 1200 kids with CP under his purview – and on one occasion he met a young CP victim named Harish Chaudhary and asked him to write anything he wanted to. “He wrote just four words,” says Suresh. “‘I want to learn’. Bina and I immediately

brought him into our family.” Harish, 15, has won regional awards in science and math, and also art, in a category called Differently Able.

Then there is eight-year old Ronan, who at 18 months had an abusive, alcoholic father and a mother who ran away from it all, and serious bronchial and other medical problems that required frequent visits to the hospital. Into the family he came, and now he is healthy and happy and full of mischief.

I had far too little time with the wonderful students at Surya Vinayak. They are just beautiful, always smiling, and are unfailingly polite: “Good morning, sir!” “May I come in, sir?” And most of them are smart as whips. I was going to teach English, but in classes eight, nine and ten, which I was assigned, their English was already outstanding, so we worked on creative writing in preparation for a test they will all have to take at the end of their tenth-grade year: short stories, factual news reporting, cover letters for a job application. And every day one of them would just stun me with something elegant or compassionate and mature beyond their years. 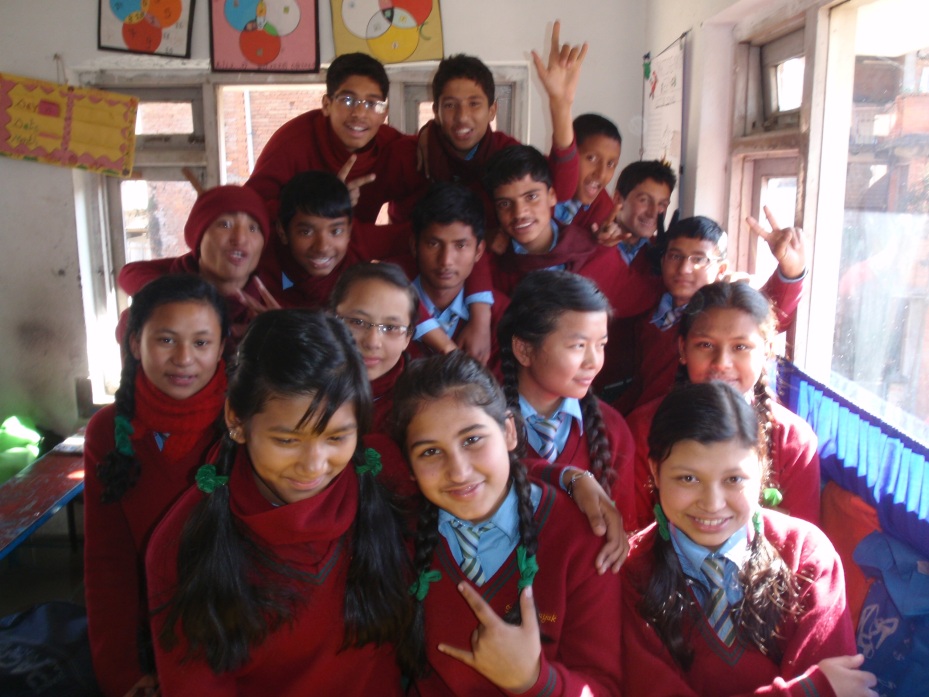 It was in between classes that we had the most fun, playing table tennis with a rolled up newspaper as a net, or just talking about sports and travel and technology. I knew I was in trouble the first day when a very personable

Prashant, the football star, and Aneesh, the rock star

tenth grader named Prashant asked me where I was from. “Oh, the United States, they are 21st in the world in math and 25th in science, but they are first in confidence,” he told me with assurance. “That’s why they are great.”

In 1951 Nepal had a literacy rate of 2%, but now it’s over 60% and they have kids like Prashant who, when I asked him what he wanted to be, said: “I will be something great. But if I can’t be something great I will marry a rich woman and be a house-husband and play video games.” Gotta love a 16-year-old with a plan.

Bina and Suresh rent part of two buildings for the school, a small muddy field for exercise and the adjacent house where they live. But several years ago the biggest and best six-lane road in all of Nepal was built just yards from the home and the subsequent development and rent hikes have been debilitating. Their teachers make one-third of what teachers make at public, government-funded schools because of the corrupt political and educational system, yet Surya Vinayak consistently turns out better results, higher test scores, more capable kids.

Suresh and Bina constantly worry about the future. They dream of owning their own property and not being at the mercy of landlords, of having fields where the kids can play their games, of having a bigger house so they can 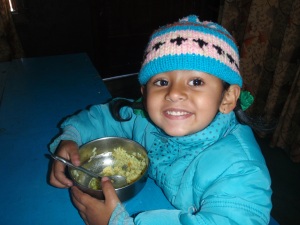 bring in more children in need: the next Ronan, the next Harish.

“Our hope is for a small, integrated school that is open to all, somewhere in the village again, like we once were.” says Suresh, “But economics are preventing this, so we are always concerned. We wonder how it will be with Harish and the others. We worry our dream will die.”

On my final day at Surya Vinayak I asked the students in each of the three classes to write an essay about where in the world they would most like to visit and why; what they would see and do there; how they think the trip would change them. All the essays were terrific and I still have them, but my favorite was from Aron Bhattarai, a shy, diminutive tenth grader. Before class he had asked me the difference between politics in Nepal and in the U.S. and we had a long discussion. His goal is to clean up the filth and pollution in Nepal. In class he read with great passion an essay about Nepal, about how it was a waste of time and money to go anywhere else, about his desire to see it become a developed nation. From where I stood I could see the big letters he had written at the bottom of his paper, and he read the final sentence with the same conviction with which he had written it: “I LOVE MY OWN COUNTRY!”

The kids had a surprise farewell for me that day and a lovely, poised eighth grader named Preeti read something special she had written and gave me a huge card her class had made wishing me well on my journey, with pictures of some of Nepal’s cultural icons and the names of every student and teacher. Bina put a red “tika” in the middle of my forehead for good luck, but at that moment I couldn’t possibly have felt any luckier.

If they were born in a developed country most of these kids would become scientists or doctors or whatever they wanted to be, and hopefully that will still be the case, but it will be so much more difficult in a country that has the second greatest capacity for hydropower in the world but can’t manage to get electricity to its people for more than eight hours per day (soon to be two). But then their intelligence and compassion are matched by their joy for life and capacity for happiness, and they have Bina and Suresh fighting for them, so I know they will be OK.

Class Ten. (Aron is in the middle in the red cap.) 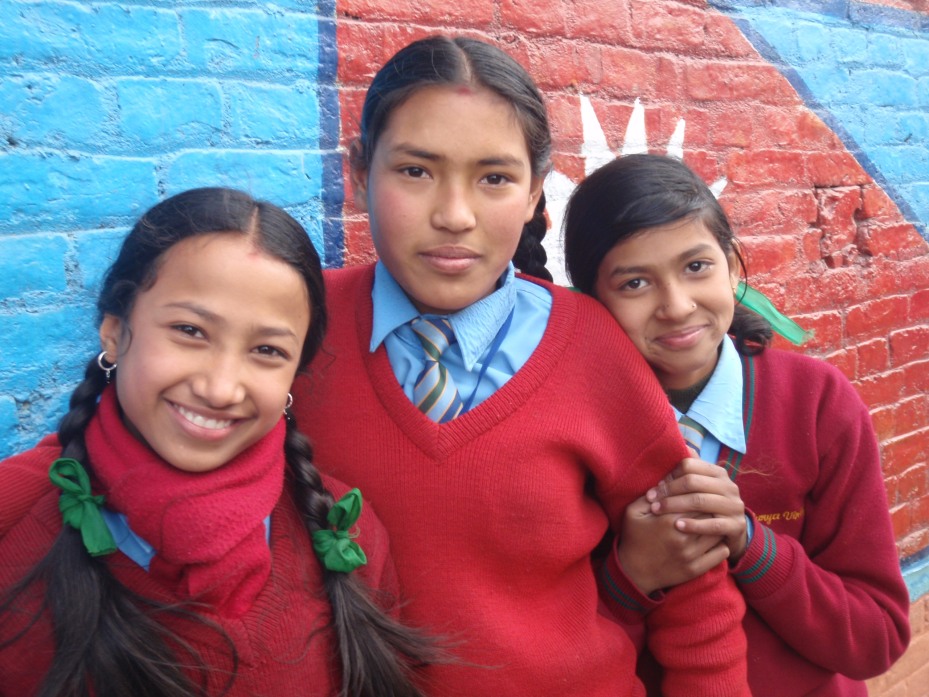 4 thoughts on “The Beautiful Faces of Surya Vinayak”