For people around my age Cambodia evokes a couple of different thoughts. We probably remember during the Vietnam War that American troops were not supposed to be crossing the border to engage in any fighting but didn’t really have a choice. We might have some recollection of Pol Pot killing many of his own people there few years later. More recently, perhaps we’ve become aware of the enormous complex of temple ruins in Angkor. So not knowing much more than that I was curious to check it out.

I landed mid-afternoon on a flight from Bangkok and was on my own until the next morning, when I would join a tour group. At the airport in Phnom Penh I went to an ATM to get some local currency and it spit out dollars, very surprising. When I saw my cab driver pay a toll with dollars I asked him what was up. “We no get many American tourist,” Kim said, “but we have much American money.” In the course of four days here we would find vendors who wouldn’t even accept Cambodian money, only dollars. And we would learn that just one dollar buys so many things … a 20-minute tuk tuk ride, an outstanding 15-minute foot massage, and a good-sized bag of fried spiders.

In an effort to make this brief and painless, here are a few bullet points about the country and its history: 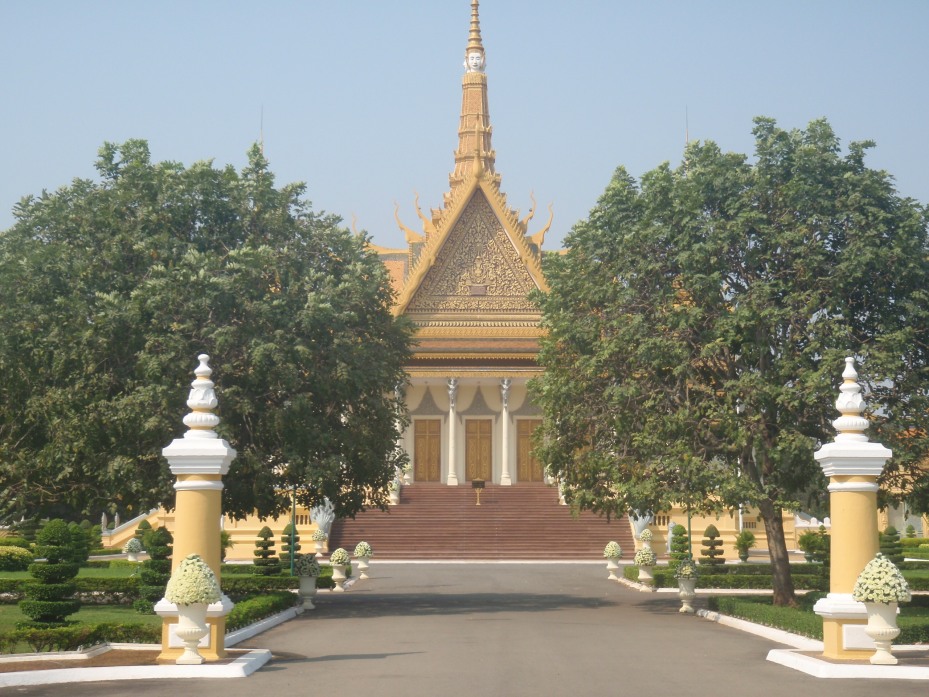 The King lives here, so they tell me. He wouldn’t take my call.

I checked in to my hotel, cleaned up and hailed a tuk tuk. This is a wonderful form of transportation that has been prevalent in many places on this trip. In Africa they are called bajajis and are more like an enclosed golf cart, 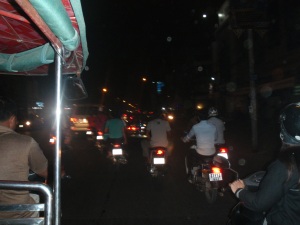 In a tuk tuk you are definitely in the middle of the action.

with the driver inside. In India they are called auto rickshaws. In Nepal and Thailand they are also called tuk tuks and are pulled by bicycles. And in Cambodia they are nice carriages pulled by a motorcycle. Whatever the configuration, they are cheap and a great way to get where you want to go, if you don’t want to go too far.

Where I wanted to go that first night was an area down by the Mekong River where I was told there were some good restaurants. My driver’s name was Yel Phoungmara and he did a great job navigating the chaos of rush hour in Phnom Penh, and I did a great job of sitting back and letting him. He picked out a restaurant for me and when I tried to pay him he said: “No, pay later. I wait.” I told him I didn’t know how long I would be. “No matter. I wait.”

I sat down and ordered a chicken curry dish ($3.50) and a very large bottle of Angkor beer ($2.50). Immediately a kid came up to my table with a box of books … guidebooks, books on Cambodian history, books that would have told me I was in a tourist area if I hadn’t already noticed all the white people. As soon as I got rid of him a withered old man in a wheelchair approached, looked me dead in the eye and put out his hand. “No,” I said, a bit too firmly. I hate being a hard ass but you have to draw the line sometimes, and approaching me at a restaurant table is crossing it.

A few minutes later a young girl came up with another box of books, and the one she held up interested me: The Killing Fields. I asked how much. “One hundred dollars,” she said with a smile, “but you can bargain.” Her name was Ne, I liked her style and we concluded negotiations at $2.00. All the books looked new and were wrapped in cellophane. “How much do you pay for these books?” I asked her. She told me one dollar each. There must be some cheap and probably illegal black market reprinting racket going on here, but so far the book actually has all the pages in the right sequence.

Ne asked me if I wanted some weed; she looked so innocent! “No, I’m too old,” I laughed. “I’ll stick to this.” I took a swig of the Angkor. “I know plenty people older than you who smoke,” she said. “Plenty older people.” God bless you, child.

I ate and looked out at the boats on the Mekong River, which starts in the great mountains of Tibet and flows down through Burma, Thailand, Laos, Cambodia and Vietnam, where it forms the fertile Mekong Delta before emptying into the South Chin Sea. After dinner I asked Yel to take me to some non-touristy parts of town but no place I felt comfortable stopping, so we headed back to the hotel. I gave him 40,000 riel — about $10 — and he almost kissed me. With transportation, dinner and the book my wild night out in Phnom Penh had set me back $19.50, and I had made one tuk tuk driver very happy in the process. A good night.

The next morning I met my tour group including my friend Maria Dancsak, whose boyfriend is an old college buddy; Maria was born in Hungary and I had dinner with her cousin Lazlo when I was in Budapest. The tour group seems full of nice people around my age or a bit older, and I learned quickly that these are folks who love to travel and do it a lot. 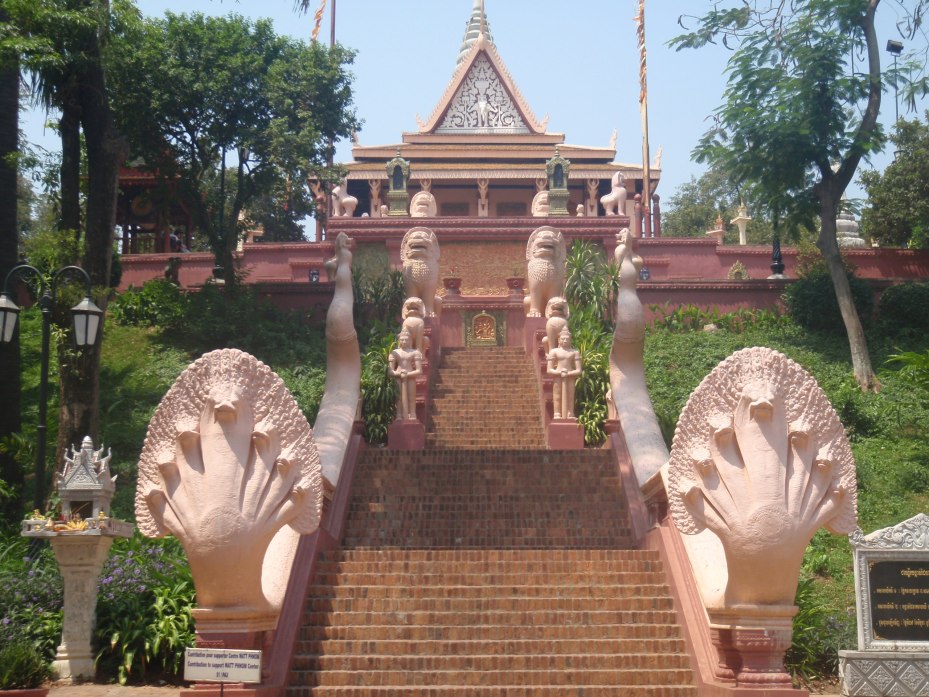 We saw some temples that first morning including the beautiful Wat Phnom, where there were some more young entrepreneurs. Dealing with these kids was clearly going to be an ongoing challenge because they are relentless, but at least they are selling something and not asking for handouts. If they buy bottles of water for $.50 and sell 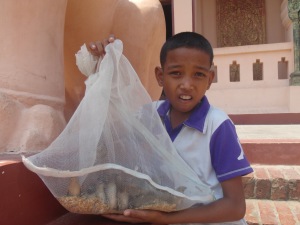 them for a dollar, it’s hard to find fault with that. And at this temple we met Naan, a young kid who had a great scam. He had a plastic bag full of baby birds and bird seed, and he would sell you two birds for one dollar so you could let them go. Of course he would just go catch them again and resell them, but you had to love his inventiveness. I ponied up for a buck and when I saw him again later there was a line of Koreans waiting to free some birds … Naan was raking it in, and good for him.

didn’t want any children around who might some day seek revenge. Estimates vary, but it’s believed that the Khmer Rouge murdered and tortured and otherwise caused the death of well over two million people, in a country of just eight million.

The Genocide Museum used to be a prison for officials of the old democratic government, a place where they would be held and tortured; often they would be hung upside down until they lost consciousness, and then dunked into a large urn of sewage until they revived for more interrogation.  Ultimately they would be taken to the infamous killing fields at Choeung Ek, where a memorial today still contains more than 5,000 human skulls.

So … cheerful stuff. But this recurring theme of one man’s capacity for evil and the lemming-like willingness of so many to follow him is a disturbing thread on this trip. Anyway, in a day or two we’ll move north to the complex at Angkor, the most Indiana Jonesy place you will ever see, and of course the ruins of the greatest temple of all, Angkor Wat. (And also a really cool monkey picture!)