The Mysteries of Easter Island

Is there a more unique and compelling place in the world than Easter Island? Most people are at least vaguely aware of the island and its mysterious Moai statues, but few have visited here because it is just so remote. The nearest inhabited island is 1,300 miles away (Pitcairn Island, with 50 residents) and the nearest continental point is almost 2,200 miles away in Chile.  This time of year only one flight per day arrives to Easter Island, from either Santiago or Papeete; in the peak seasons it increases to 16 flights per week.

I arrived on the weekly red eye from Papeete and landed on the longest runway in either Chile or Polynesia, more than four kilometers in length. Some years back NASA paid to have it expanded to serve as an emergency landing spot if the space shuttle ever got into trouble out here in the middle of nowhere.

The island is triangular, and just 63 square miles. There are surprisingly few trees, and the coastline is rugged and very links-like; a golf course architect would see a myriad of possibilities here. It’s not nearly as mountainous as Tahiti, the elevation changes provided by the four large volcanoes and 70 smaller ones that punctuate the landscape. I visited the largest volcano, Rano Kau, the first day; it’s 1.5 kilometers in diameter and as perfect a volcano as you’ll ever see, although a big section of the crater rim to the east looks like someone took a bite out of the pie crust. Rano Kau last erupted 2.5 million years ago.

There are 7,000 inhabitants of Easter Island, 4,000 native Rapa Nui and 3,000 mainland Chileans who cannot own land but rent because there are jobs and no taxes. Like Tahiti, tourism is the primary industry, with 100,000 visitors per year; there is some fishing and a little bit of agriculture, but that’s about it. Everything the locals and hotels need is imported, a challenge because there is no port. Onions or autos, it is all offloaded onto barges and brought ashore. Hanga Roa, in the southwest corner next to the airport, is the island’s only real town.

In the Kuala Lumpur airport I met an adorable little Kiwi girl on her way home to Auckland who told me Easter Island got its name because the Easter bunny lives there. She was close. The first European visitor to the island was a Dutchman named Jacob Roggeveen who arrived on Easter Sunday in 1722, and so named it. Unfortunately when we were there the Easter bunny was in abstentia, gearing up for his big weekend. Or is it her big weekend?

The Polynesians who first arrived here around the year 400 called it Te Pito O Te Henua, “The Navel of the World,” (every island in Polynesia has a navel) and eventually Rapa Nui, “The Big Land.” All the indigenous people became known as Rapa Nui. The first to migrate here were the long ears, Polynesians who wore heavy jewelry in their ears to elongate their lobes. The second migration hundreds of years later brought the short ear people, who were welcomed by the long ears and then informed they would be doing the hard labor. Thus enslaved, it was the short ear people who not only carved but also transported the legendary statues, the Moai.

Between the years 800 and 1600 the Rapa Nui made or started to make 900 Moai to represent the incarnation of the spirit of their kings and chiefs, who were buried in the ahu, the elaborate stone altars on which the Moai were placed. In this way the Moai represented a resurrection of sorts for the chief: eternal life.  The statues all stood along the coast and faced inland, toward the families they were there to protect.

The Rapa Nui had no metal and used the harder obsidian and basalt rock as tools to carve the statues out of the softer volcanic tuff. Each Moai included the head and torso, long ears, arms, and hands folded in front of the

belly, with long fingernails. In later years the chiefs started dying their long hair red and wearing it knotted on top of their head, so the newer Moai also featured a red “topknot” that was carved at a separate quarry where not long ago 700 topknots were found. Once the statues were solidly anchored on the ahu the eyes were added, usually made of white coral, and only when the eyes were in place was a Moai considered alive.

The individual statues averaged about 16 feet high but several have been found over 30, and they weigh between 40 and 80 tons. The Rapa Nui got more ambitious over the years and the larger statues represent later efforts, rather than more important chiefs.

How they were transported is one of the many Moai mysteries. Natives claim they walked to their respective ahu. Since the island was covered in thick Chilean palm trees, for a time it was believed the tree trunks were used to roll the statues to their location, but that has been disproved. Scientists now find evidence that the Moai did indeed walk, or rather were walked by the Rapa Nui, who picked up one side and then the other, moving it slowly forward as the statue was upright. As with the Great Pyramids or Stonehenge we’ll never know for sure, but what we do know is that 250 of the ahu platforms were constructed – you can see their ruins up and down the coast – and that 400 Moai eventually reached their positions on the ahu.

By 1600 the population of Easter Island had grown to an unmanageable 20,000 and all the natural resources had been depleted, including the trees. The working class short ears finally had enough and went to war with the long ears, in the process knocking over all of the 400 Moai that had been erected around the island. They were toppled face down so the eyes would fall out or be easily removed, rendering them good and truly dead. All of the 36 Moai standing today have been excavated, restored and replaced on their ahu since 1960.

The Ahu Tongariki shrine, as seen from the quarry several miles away.

The most impressive array of Moai today is at Ahu Tongariki on a stunning piece of property on the northeast coast of the island. In 1960 the ruins of this shrine were devastated by a tidal wave, but in 1991 the Japanese company Tadano, which makes cranes and other large construction equipment, undertook a massive excavation project. The company’s motto is: “Tadano can even lift history,” and they proved it; Ahu Tongariki is the largest shrine on the island, and the 15 statues here lord over the plain to the west, impassive and yet fierce.

I should have included more people in these pictures for scale, but hopefully the guy in the green shirt provides some perspective.

We visited the only Moai not on the coast, the seven statues of the Ahu Akivi. They do not represent chiefs or kings, but rather explorers sent by an ancient king to find an island he saw in his dreams. They face “home” … west, to Polynesia.

The seven explorer Moai of Ahu Akivi, facing west to their Polynesian homeland.

Adjacent to Anakena, the best beach on the island, is Ahu Nau Nau, which features five full-sized Moai, four with topknots.

And within walking distance from my hotel was Tahai, a complex of three small temples featuring Moai that draw a crowd every evening as the sun sets behind them.

The temple at Ahu Tahai is a popular spot at sunset.

But the coolest place of all is Rano Raraku, the volcano/quarry where most of the Moai were carved. Of the 900 discovered statues, 400 are still in the quarry, in various stages of completion. Some are just heads, some have been half buried over time, some are still embedded into rock on the side of the volcano. The Moai on the various ahu around the island have been excavated and restored over the past 50 years, but Rano Raraku seems so authentic, and provides insight into the remarkable effort that went into creating just one of these massive icons. Some of the completed Moai at the quarry were never toppled, left standing by the short ears because they hadn’t yet received their eyes.

Heads of some of the 400 Moai at the main quarry site.

One quick story before leaving Easter Island. Around 1660, after the war had ended and the royal family had been killed, leaders of the island came together and decided they needed a democratic way to choose a new king. Each family, or tribe, sent a representative to an annual meeting at Orongo, on the rim of the Rano Kua volcano. Just

The far island is Motu Nui, where the frigate birds nested.

off the coast is an island called Motu Nui, where frigate birds nest in September. So they decided on a competition. Each family’s designee would descend the 300-meter cliff to the ocean, swim the kilometer and a half to the island, find the egg of a frigate bird, attach it to his head protected by moss and leaves, swim back to shore, climb the cliff and run to the finish. The first to cross the line with an unbroken egg was declared the winner, and his chief was crowned king for the following year. If we could only come up with a similar system in the U.S., we could eliminate campaign commercials.

The “birdman” competition continued for 200 years, until Christianity arrived around 1864. And now one airplane per day brings people to this remarkable place, to see the captivating remnants of one of the world’s most fascinating cultures.

A group of very nice and fun Colombians pose at Ahu Akivi.

From the quarry a good look at the treeless terrain of Easter Island, and a few of the smaller volcanoes. 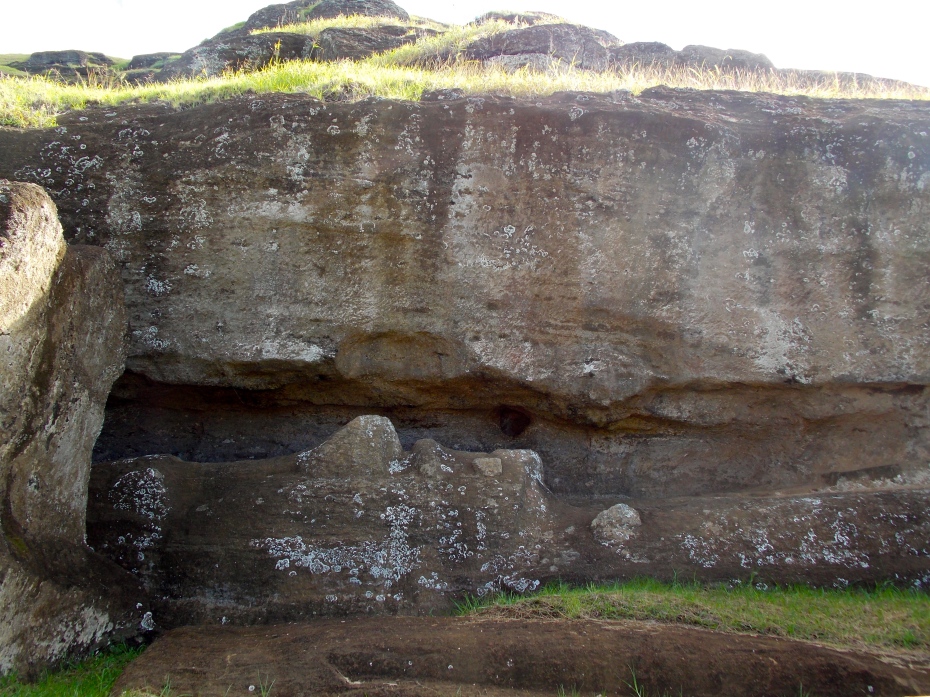 This poor guy never made it out of his volcanic womb. 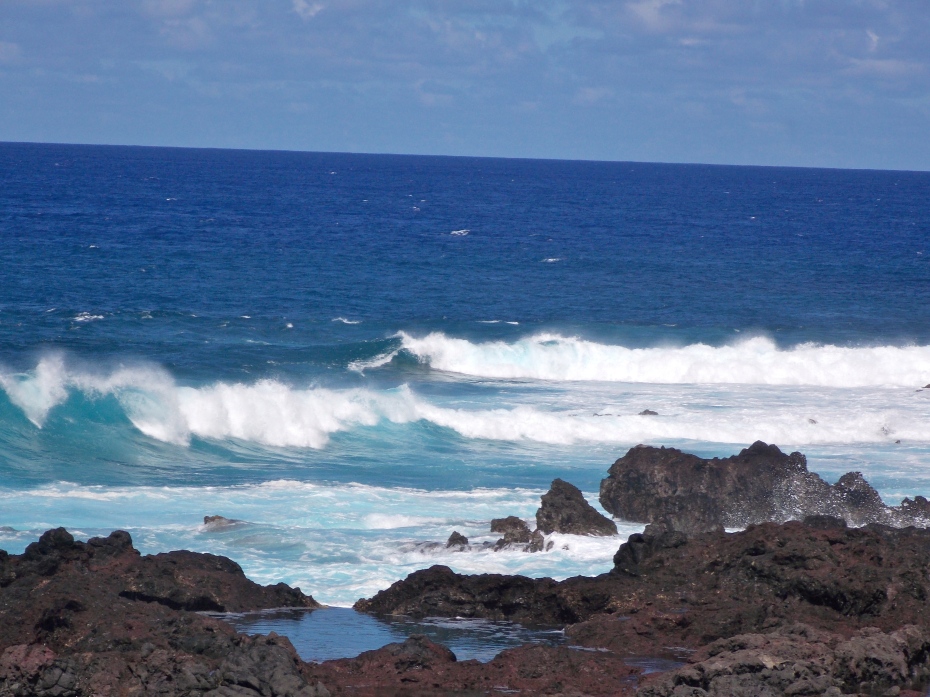 The colors of the Pacific and the rocky coastline are a stunning combination. 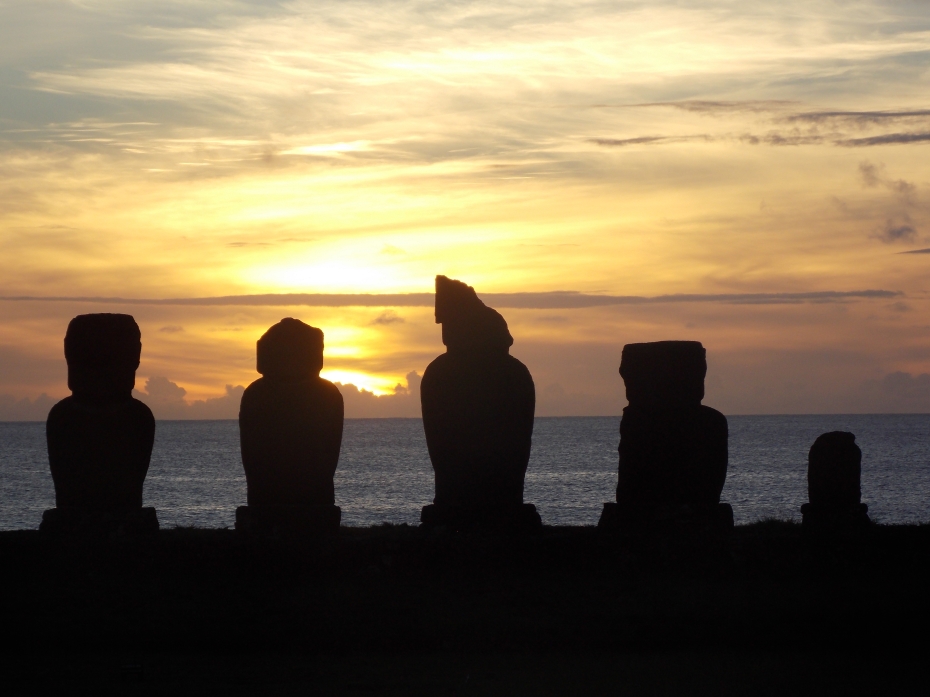 Recognize the fourth guy from the left? We didn’t realize that when he was phoning home, home was really Easter Island. Cheers!

2 thoughts on “The Mysteries of Easter Island”