Posted on September 14, 2012 by ruffinontheroad

Home base on and off until the end of the year is a comfortable one-room apartment in Salzburg, Austria, a city chosen because of its central European location and because everyone who has been here seems to fall in love with it.

The drive here from Normandy took three days, one gorgeous day across northern France and two dreary, foggy days down to Lake Geneva and then up through Zurich and Munich to Salzburg. I drove through some of the most magnificent scenery on this planet and couldn’t see any of it. But you still manage to learn a few things along the way.

The Hills Are Alive

The film The Sound of Music came out in 1965 and eventually replaced Gone With the Wind as the top-grossing movie of all time. It takes place in Salzburg, and my apartment has a DVD of the film, so I watched it when I first arrived. I hadn’t seen it in many years but it really does hold up; the music and the story are wonderful. 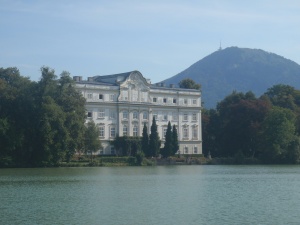 Even though the it’s set here and was partially filmed here, it was another ten or 12 years before Salzburg itself discovered the movie, and you get the sense it has never been fully embraced. Nevertheless, entrepreneurs decided to capitalize on the film’s enduring popularity by giving tours of some of the locations used in production, and today, you see Sound of Music tour buses and vans throughout the city. It seems every non-Salzburger has either just done the tour or is planning to.

With a few exceptions the exterior shots were done in Salzburg and the interiors in London studios. The hillside in the opening scene where Julie Andrews twirls and sings the title song is now a housing development, and is many kilometers from Salzburg. “If Maria had run back to the convent from there,” said Bruno, our guide, “she’d still be running.” The actual Nonnburg Abbey was built around 700, rebuilt in 1400 after a fire, and was the site

of the real wedding between Maria and Captain von Trapp in 1927. It sits today in a place of prominence overlooking Old Town Salzburg.

I was joined by George and Mary Sacks, a great couple from Boca Raton, Florida, and the tour was fun and provided insight into the city as well as the production sites. We saw the garden where some of the “Do, Re, Mi” number was filmed; the building across the lake where the exterior scenes at the Captain’s mansion were staged; the gazebo featured in several of the love scenes (the movie company donated it to the city); and the highlight, the magnificent Parish Church of St. Michael in Mondsee, where the wedding was filmed, one of the few indoor venues in Austria chosen to be in the film. It was easy to see why.

Up Close and Personal with Austrian Health Care

Republicans in the United States would find the health care system in Austria uncomfortably socialistic. It’s a fairly simple two-tiered system through which most people – with a small contribution from their paycheck – receive publicly funded health care and then have the option to purchase supplementary private health insurance, which is affordable for the middle class and provides access to higher-priced doctors and private hospital rooms.

So the government gives you a coach ticket, and you can upgrade to business class if you choose. It seems to work well, as Austria is among the world’s top ten rated systems in the most recent World Health Organization rankings. “But it’s not like it used to be,” Bruno, the Sound of Music guide told us, “before the European Union.” He felt that money that used to go into health care is now propping up struggling European economies. But others disagree, and believe the system is as good as it’s ever been.

Being but a stranger in this land, a foreigner with a credit card, I can’t testify to coverage provided by the system, but from my recent experience with knee surgery I can certainly comment on its efficiency. I’ve never seen anything quite like it.

This all happened on a Tuesday: At 9:30 a.m. I received an email from Gabi Frost, my landlord, recommending a local orthopedic partnership. At 11:30 I walked in and asked for an appointment, and was told to come back at 2:00. I returned at 1:45, was in the doctor’s office at 1:50, on the examination table at 1:55, and by 2:00 had an appointment for an MRI as soon as I could get there. I walked 15 minutes to a facility that features one of only two open MRI machines in Austria. By 3:00 I was walking back to the doctor’s with the MRI disk, and by 3:20 was in his office looking at my “miniskusruptur” on his computer. The meniscus was torn and starting to impact the surrounding cartilage. It needed to be scoped.

So, in less than two hours I had met two doctors who had been recommended that morning, got the knee examined, had an MRI, reviewed it with the doctor and decided on surgery. I’d suspected this would be necessary ever since descending Kilimanjaro and being prepared mentally made the decision easier, but still, the speed with which it all happened was remarkable. We scheduled the surgery for Friday morning, at a nearby private hospital.

The “Privatklinik Wherle” looked more like a boutique hotel. It was a yellow, three-story building with white columns and an ornamental railing on a second floor balcony, big trees in the yard, all surrounded by a white fence.  Inside, the décor was a bit more Hospital Traditional, but still very nice, serene, and amazingly empty; I saw one other patient all

day. There was a spacious coffee shop on the third floor with a view of the dramatic Untersberg, the peak that is the opening scenic shot in The Sound of Music. (Bruno had told us that “Unter” is Celtic for mountain, and “Berg” is German for mountain. So the name of this mountain is Mountain Mountain).

I took pictures of everyone I came in contact with: Dani at admission, who was once an au pair in Miami; Robert, who took my information; Sabine, who patiently guided me everywhere; Margit with the chest x-ray, Judith with the EKG. I had a great talk with Eugene, the anesthesiologist, who had worked for a number of years in Dubai and Abu

Dhabi. These were all wonderful people who obviously loved their jobs, and they certainly made the day comfortable, even fun. (I brought the camera into the operating room, and you see the result at the bottom … I have no idea who took that picture).

The surgeon was Dr. Harald Kiss, a 40ish, athletic guy who bikes a lot and once had ACL surgery because of a ski accident. I asked him early on if he had ever done this before. “A thousand times,” he said patiently. “And I assisted on this procedure maybe 400 times before I did it myself. Today, you assist 30 times and then you can do it.”

Time will tell, but Dr. Kiss seemed like the right guy for the job. And he did come up with one of my favorite all-time lines. Five days after the surgery I told him the knee felt fine. “This is the danger time,” he said. “You start feeling good and thinking you can be normal. Keep using the sticks (crutches). And ….“ He wanted to tell me not to overdo it, and searched for right words in English.

“And don’t crash the world,” he said.

Not for a while, Doc. But as I head off to Italy and Croatia I am looking forward to being more mobile when I return in a month for Salzburg: Part Zwei.