Posted on September 16, 2012 by ruffinontheroad

Prior to and during World War II there were 23 primary concentration camps throughout Germany and German-occupied Europe. While names like Auschwitz and Dachau evoke immediate emotional responses, one of the worst was Mauthausen, a Grade III camp in northern Austria, the designation being given to only the toughest and most fearsome prisons for “the incorrigible enemies of the Reich”.  Mauthausen was known within the SS  by its code name of Knochenmuhle: “The Bone Grinder”.

The site was chosen because of its proximity to granite quarries and because it was just 12 miles from Linz, where Adolph Hitler went to high school. (The fact that he was actually born in Austria seems to get overlooked, which is just fine with Austrians). It sits atop a hill, its foreboding stone walls and barbed wire in stark contrast to the lovely riverfront town of Mauthausen that it overlooks in one direction, and the beautiful rolling hills and farmland that extend in the other.

Mauthausen was a moneymaker, a commercial enterprise that was actually founded by a private company to be an economic engine for the Reich. Slave labor from the camp was used in quarries, arms and munitions factories, mines and many other labor-intensive endeavors, but quarries in particular because of the great number of construction projects in and around Nazi Germany.  At one point as many as 45 different companies were benefiting from the labor pool provided by Mauthausen. When Heinrich Himmler, who was in charge of all concentration camps, would visit the camp he would inspect only the work areas, focusing on the business of inhumanity rather than the inhumanity itself.

In 1938 prisoners were brought from Dachau to start building the camp at Mauthausen, and the first inhabitants were “incorrigible law offenders”, those who had committed a crime, real or perceived, including many who had already completed their sentences. In 1939 new “detainees” were largely political prisoners, German, Austrian and Czech socialists, communists, anarchists and homosexuals, and in early 1940 many Polish artists, scientists, teachers and professors were added to the mix. The camp developed a reputation as being home to the intelligentsia. 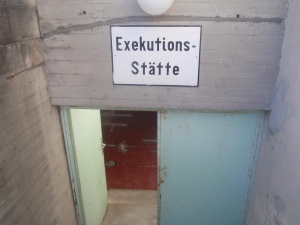 By 1942 the largest population in the camp was Russian, the second largest Spanish. Spanish Republicans had fled to the north after Franco got elected, and were captured when Germany invaded France. Russian and Jewish prisoners received the worst treatment, German and Austrian the best.

There was one serious escape attempt that was documented in a film that is shown in the Visitor Center.  The SS was particularly hard on the Russian prisoners, who were housed in Block 20. They spent from 5 a.m. to 5 p.m. every day, regardless of weather, standing outside in the yard (20 degrees below zero is not uncommon here in the winter). At night they slept on the floor if they could find space, or on top of each other. If it rained and an SS officer was visiting, the Russian prisoners were called upon to form a human carpet in the mud so the officer wouldn’t soil his boots.

On February 2, 1945, the Russian prisoners executed an elaborate escape plan that included diversions, short-circuiting the electrified barbed wire, and forming human ladders. Many were shot and killed within meters of the outer wall but many made it into town, where they were hunted down and shot, and stacked like a cord of wood in the town square. Townspeople suspected of harboring escapees were killed also, but many of them continued to do it still. 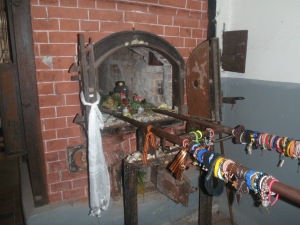 By one account inmates at Mauthausen were killed by 65 different methods, from being injected with gasoline to hanging to having pieces of their brain removed. But the overriding strategy at the camp was Vernichtung durch arbeit: Extermination through Labor.

Perhaps nothing terrified the prisoners more than the “Staircase of Death”, which led from the quarry below back up to the camp. It was an immense, wide stone pathway totaling 186 stairs, on which prisoners would be required to carry huge stones weighing over 100 lbs. after a day of toiling in the quarry with no food or water. Some collapsed and died, others fell over backwards triggering a horrifying domino effect with men and stones tumbling down the stairs. Those who couldn’t make it to the top were brought to the cliff overlooking the quarry and given a choice of being shot or pushing a fellow inmate to his death.

This is an excerpt from the confession of Franz Ziereis, the Commander of the Mauthausen Concentration Camp, taken after he had been shot and wounded by American troops trying to escape following the liberation of the camp: 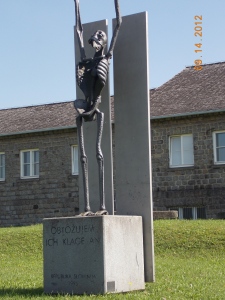 Himmler gave the order to load a 45 kilo stone on an inmate’s back and make him run around with it until he fell dead. Himmler ordered us to establish a penal labor company according to this system. The inmates had to haul stones until they collapsed, then they were shot and their record was annotated “Trying to escape”. Others were driven into a fence made of charged high-tension wire. Others were literally torn to pieces by the dog named “Lord” belonging to the camp commander Bachmeyer who sicced it on the inmates. On 30 April 43, inmates of the camp office were ordered to assemble the court yard. There they were shot like wild animals by SS Oberscharfuehrer Niedermeyer and the Gestapoagent Polaska. Altogether, as far as I know, 65,000 inmates were murdered in Mauthausen. In most cases, I myself took part in the executions.

On the day I visited Mauthausen there were very few other visitors. I stood in the large open courtyard inside the main gate, alone with the spectral images in my mind of the more than 300,000 men who were incarcerated here, their average weight 85 pounds, their spirit diminished daily by the sadistic imagination of their captors.

The remaining barracks were on my left, buildings that were designed to house 300 inmates, two to a bed, but that toward the end of the war held 2000. To the right was the Wailing Wall, where prisoners were first stripped of their clothes and their

dignity, and beyond that, buildings that housed the laundry and the kitchen. Beneath those, in the basement, were the horrific remnants of true evil: the gas chamber, the ovens, the hanging room, the dismemberment room.

In April, 1945, knowing that the war was coming to its inevitable conclusion, the SS ramped up and killed 10,000 prisoners, including 200 Austrian resistance fighters who died during the final use of the gas chamber on April 28. The camp was liberated on May 5, 1945, by the 41st Reconnaissance Squadron of the 11th Armored Division of the 3rd U.S Army. Most of the SS had fled and the prison was being run by elderly firefighters from Vienna, but the remaining 30 SS members were killed by the prisoners. The Americans buried 1200 people the first day and 300 per day for weeks afterward. Mauthausen was the last of the Nazi concentration camps to be liberated.

Maybe 10% of the original camp still stands. The majority of it was dismantled after it was liberated, including most of the barracks and all of the SS living and administration buildings. On the site of the former SS buildings stands a Memorial Park that was begun in 1949. It contains dramatic monuments donated to the site by various nations and groups who lost native sons and daughters at Mauthausen. 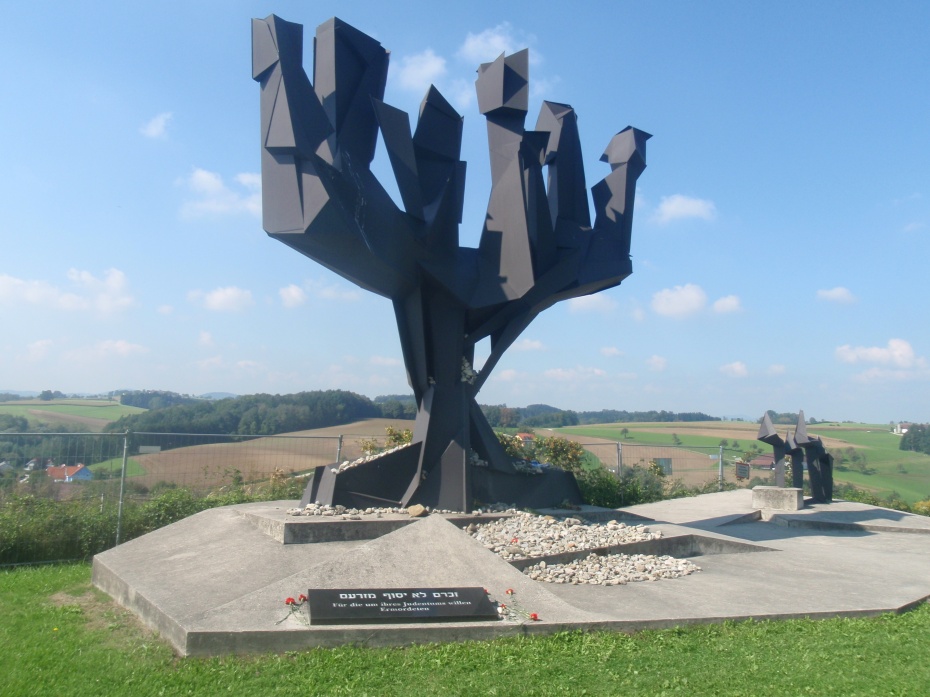 I found the Memorial Park to be full of hope. Part of it, I think, is the variety of messages from so many nations that had been impacted, and the creative and thoughtful way they were expressed. The French monument is a sculptural tribute to liberty, and the Slovenian is a statue of a human skeleton reaching to heaven.  The Italian monument is a wall that features scores of smaller tributes to individuals lost at Mauthausen. And the most dramatic and impactful of all is the Israeli monument, which in part features a huge Minora of twisted metal framed against the verdant farmlands to the west. To me, the Memorial Park represented decency and civility, and it conveyed the feeling that we are all linked by an abhorrence of these atrocities and a fundamental belief in the goodness of man.