Posted on October 3, 2012 by ruffinontheroad

I was in Florence once before, when I was young and stupid. I feel fortunate to have a chance to return with a greater appreciation for magic that the city has to offer.

I’m here with my good friends Leo and Penny McCullagh, eating too much and drinking great wine, putting on all the weight I lost in Africa and having a rocking good time driving these insanely narrow, stone-walled medieval streets that are two-way, but wide enough for about a car and a half. Fortunately, many people here drive what appears to be half a car.

We spent the early part of the trip exploring some of the outlying areas and enjoying the wonderful scenery; the quaint villages with their terracotta roof lines, the walled remnants of the middle ages, the distant landscapes dominated by rows of the tall, slender Cypress trees that seem so uniquely Italian. We found an amazing old medieval fortress town called Montefioralle, overlooking Greve in Chianti, and were so taken with its charm, its narrow

cobblestone roads and high stone walls that we returned a second time just to have lunch at Taverna del Guerrino, down some steps that have probably been there 1000 years and onto a terrace overlooking the gorgeous rolling hills and vineyards of the Chianti region.

Curiously, in the countryside between Florence and Chianti we saw quite a few “working girls” on the side of the road, sitting in folding chairs, talking on cell phones, waiting for business. We had to wonder: Who would their clients be, exactly, at 11:00 a.m. on a Monday morning?

On the way back from Chianti the second time we stopped at the Florence American Cemetery and Memorial, a lovely and beautifully maintained tribute to the American soldiers who died while taking Tuscany from the Germans in July and August of 1944, en route to liberating Italy

in May of the following year. There are 4,398 headstones in the cemetery, with another 1,409 soldiers missing in action honored as well. After being here as well as the cemetery overlooking Omaha Beach, I have to pay tribute to the American Battle Monuments Commission for the job they do maintaining many dozens of monuments and cemeteries around the world.

The highlight of the week, though, was spending time in Centro di Firenze, the heart of the magnificent city of Florence. Like so many places outside the U.S. it’s difficult to comprehend the shear volume of history encompassed in the streets and the walls; anything built after 1700 is concerned “modern”. The city was founded by the Romans 59 years before the birth of Christ as a kind of retirement community for veteran soldiers. The current Piazza della Repubblica, which according to our guide Samuele serves as “the living room of Florence”, was once the site of the Roman forum. On the day we were there a stage was being constructed for an upcoming concert by Iggy Pop to commemorate the first anniversary of the local Hard Rock Café. How times have changed in a mere 2000 years.

Florence was conquered by Charlemagne in 774, and by the 1300s was one of the three largest cities in the world, along with London and Rome. In the 1700s it was briefly part of Austria, it was taken over by the French army for a time, and then it became the capital of the new kingdom of Italy from 1865-1870. It was also occupied by those pesky Germans for a while in the 1940s.

Eclectically European though it might be, more than anything Florence is known for being the birthplace of the Renaissance (1401-1510) and home to some of mankind’s greatest works of art and architecture. And also literature; Dante was born and lived in Florence. 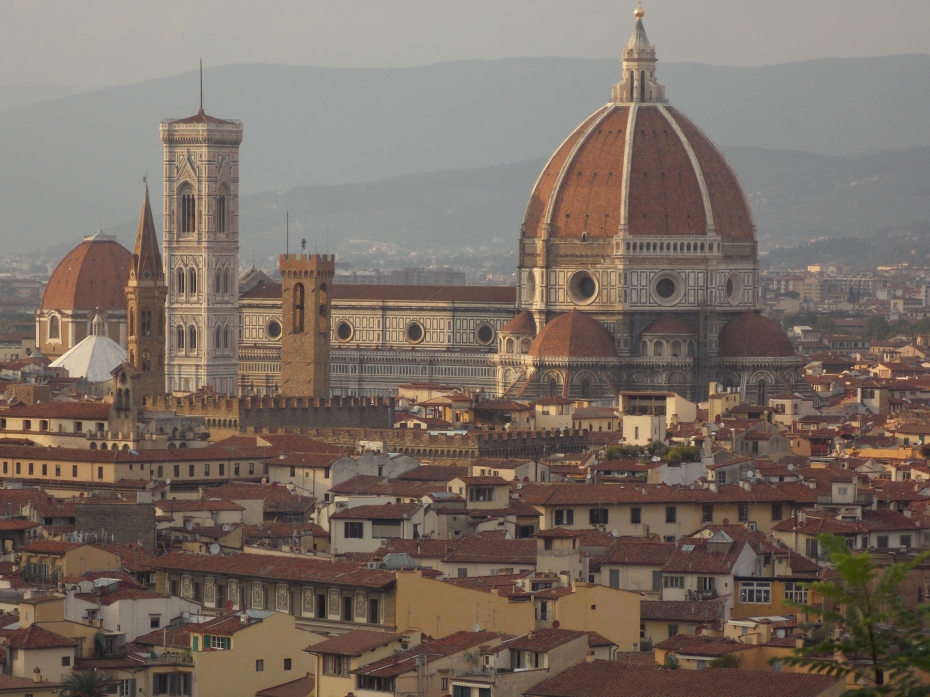 Samuele took us first to the Basilica Santa Maria del Fiore, known colloquially as Il Duomo. It is huge, visible from almost everywhere in the city; its dome is the highest point in Florence, and its bell tower the third highest. It was built on the site of an earlier cathedral from the 5th century that was deteriorating with age and was not big enough to handle the growing population.

Il Duomo was begun when the Pope came to place the first stone in September, 1296, and although functional it

wasn’t truly completed until 1436, when the massive dome was added. In front of the church is a large baptismal, necessary because at the time, unbaptized people where not allowed in the cathedral. The gold door of the baptismal was so sublime and beautifully detailed that Michelangelo himself called it “The Gateway to Paradise.”

Inside, the cathedral is somewhat disappointing. There are no pews, just a huge open area with an elaborate marble floor. There are two things of interest in the interior: a very unique clock that is based on sunset being 12:00, and the dome itself, on which is the largest fresco surface in the world. The painting is called “The Final Judgment”, and it is six times larger than the Sistine Chapel. 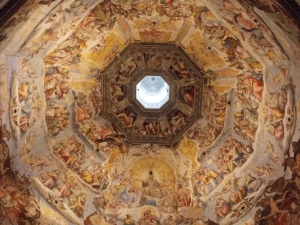 The church had been built with a hole where the dome would go, since no one could figure out how to safely engineer something that big. So they held a contest in 1418 and awarded the job in 1420 to a young architect named Filippo Brunelleschi, who finished in 1436 and destroyed all his notes, so no one is quite sure how he did it. The dome weighs 13,000 tons and still stands as the largest brick dome in the world, so well done, Filippo.

Samuele showed us the street where Dante might or might not have been born. In any case, they have constructed a fake house in his honor, “so at least everyone comes here and talks about him,” Samuele said. “You have to realize that Dante is to Italy what Shakespeare was to England. He created our language.” At the time Dante was writing The Divine Comedy, people were rebelling against Latin, and he was the first to write in the new Florentine language, which gave birth to Italian.

We stood on some church steps and Samuele pointed out an architectural cornucopia covering 1000 years: Medieval, gothic, Renaissance, Baroque, neo-gothic, mannerism, neo-classical, and 20th century, all visible from one street corner. Pretty amazing. And below us were Roman ruins going back another 1000 years or so that can never be excavated.

Probably nothing in Florence is as enduring as Ponte Vecchio, “Old Bridge”, which spans the narrowest part of 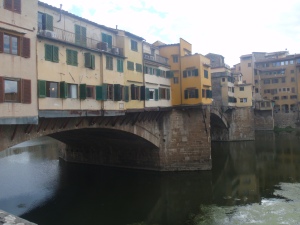 the Arno River. The bridge’s history extends back into Roman times but first appears in a document in 996; it was swept away in 1117, rebuilt and lost again to flood in 1333, and rebuilt yet again in 1345. It was the only bridge in the city not destroyed by the Germans in 1944, allegedly because of an express order from Hitler.

The bridge has always hosted shops, butchers initially, but now overpriced jewelers and art dealers and souvenir merchants populate the bridge, catering to the tourists.  You don’t even sense you are on a bridge until it opens up at the center, where, on a fence surrounding a statue, lovers have placed padlocks and thrown the key into the river as a symbol of their unbreakable bond.

Nearby is one of the oldest art museums in the Western World, the Galleria degli Uffizi. It was initially an office building for the legendary Medici family, who ran the town for a long time in the 16th century. The Medicis archived some artwork they had collected or commissioned (or stolen) in the office building, and as the collection grew the building became more museum than offices, and once the house of Medici was extinguished it became open to visitors by request, and finally open to the public in 1765. We moved through quickly, dodging the large groups of Japanese but stopping to admire many incredible paintings such as Botticelli’s The Birth of Venus. 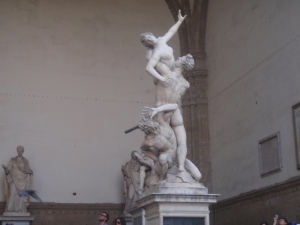 The highlight of any artistic perusal of Florence is Michelangelo’s magnificent statue of David. Once the powerful Medici family was overcome and sent into exile, its enemies commissioned the statue to symbolize the death of the “Goliath” and the threat to civil liberties by powerful rival city-states. (Years later, when the Medicis came back into power and after the statue had been damaged by lightning and a bench thrown out of a window, they had it repaired to demonstrate that their love of art was greater than their animosity.)

Michelangelo started the statue in 1501 at the age of 26, using a suspect block of marble that had been sitting around for 25 years exposed to the elements. Three years later he completed it and spent the rest of his days depressed because he believed he could never equal it. When average life expectancy is 45 you can just take early retirement at 29, but then Mike defied all the actuarial tables by living to age 89.

In 1873, the 17-foot David was moved to the Academia del Bella Arti over the course of ten days. You can’t take photos of the statue now, but a replica stands at the original site in the Piazza della Signoria, an amazing open forum of art that includes a number of original statues including The Rape of the Sabine Women.

With a sling over his left shoulder and down his back to the rock in his right hand, and with a “man, that dude is huge!” look in his eyes, most agree the work portrays David just before his battle with Goliath. We know how that turned out. David has been the hero of the underdog ever since, and thanks to Michelangelo’s genius has inspired Florentine visitors for more than 500 years.