Posted on December 27, 2012 by ruffinontheroad

I trust everyone had a wonderful, over-indulgent Christmas with family and friends. My Salzburg buddies and I had a nice farewell dinner, and Christmas day was spent packing and enjoying some goose soup, a concession to the local holiday cuisine.

I’ll probably end up saying this about the whole trip but certainly the European section to me will always be about friends … catching up with old friends and making new ones. Hanging out in Florence with Leo and Penny McCullagh; sailing in Croatia and touring Rome with Tom and Peggy Briggs and being with them in Tuscany with Rick and Nancy Richardson; spending quality time in Rome with Brother Santiago Mejia-Rojas; doing Vienna and Salzburg with my amazing sister, and having dinner in Vienna with Julie Hautin, a friend from Paris who volunteered with me in Tanzania; my Salzburg friends Gabi, Maria and Thomas, and the entertaining tour guides they introduced me to; and my wonderful new friends from the river cruise. They’ve all had a hand in making the past four months so memorable.

As far as places, Prague, Budapest and Vienna stand out as very special cities for very different reasons. The  islands of Croatia are beautiful, especially Trogir, Hvar, and Korchula, and of course Dubrovnik as well. Rome is in a league by itself when it comes to history and art and religion. But it’s the beauty and ambiance and food and wine of Tuscany that seems to be the most enduring memory. I’d love to go back one day.

Anyway, here are a few other items and random thoughts as I leave Europe, with a couple of nice shots of Salzburg after a fresh snowfall.

Greifswald.  While on safari in Kruger National Park in July I spent a couple of days with Michael North, his son Chris, 16, and daughter Connie, 12. Michael is the chairman of the history department at the University of Greifswald, in northern Germany. When we parted company in South Africa I said something about maybe

coming to see them when I was in Europe. In early December Chris sent me an email that basically said “are you coming or not”, so I booked a rental car, made plans to spend a day in Berlin and then head up to the Baltic Sea.

I don’t have much to say about Berlin. I know it’s a terrific city and maybe I’ll visit again under better conditions, but I was there just after the shootings in Connecticut and it was the wrong time to be sightseeing. I did a three-hour walking tour on a cold and rainy day, and saw some stuff … a big chunk of the wall that was fourth-generation, not at all what it looked like originally (but I liked graffiti you can see below: “madness”) … Checkpoint Charlie, which has been rebuilt for tourists with German guys in American military uniforms who charge you to take their picture … a parking lot marking the location of the bunker where Adolph Hitler and Eva 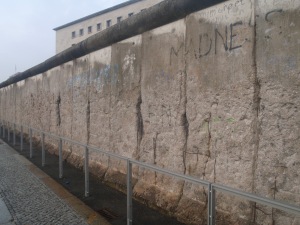 Braun were married just before they took cyanide pills and ended up in a pool of burning gasoline, surely one of history’s least romantic honeymoons.

From Berlin I drove north to Greifswald, a chance to experience the real German autobahn. In my little Ford I made it up to 180 kilometers per hour – about 112 mph – before wimping out. At one point I was doing 100 mph in the middle lane and Audis and Beamers and Mercedes were passing me on the left so fast it made my car shimmy. In the rain. These people are nuts.

Reconnecting with the North family was a very welcome distraction.  Michael and I walked around town a bit that first evening before Chris joined us for dinner at an Italian diner. The next day Michael showed me his university, which has 12,000 students, many of them from countries around the Baltic like Finland, Norway, Estonia and Russia. We visited the historic old cathedral, and then drove 10 minutes to the beach, in a fishing village on the edge of the sea, where we had an amazing and very scenic fish lunch. That evening I was invited to their home for cheese and wine and had a great time … got to see Connie again, and meet Regina, Mrs. North. They are all excellent musicians … double bass, cello, piano and organ, trumpet, bassoon … the Von Trapp family of northern Germany! Wonderful people, and as they come to the U.S. every year I will see them again.

It’s a Small World, Part II.  Many of you know about the man for whom I am named, my great x 3 grandfather Edmund Ruffin, who at the age of 61 fired the first shot at Ft. Sumter and kicked off the Civil War.

When I was in Michael North’s office at the University of Greifswald I saw a small confederate flag in a pencil holder on his desk. “I gave a speech not long ago in Chattanooga, Tennessee, and brought that back,” he said, ever the history buff. So I told him about Edmund Ruffin and he became very animated. “I know this guy!” he said excitedly. “I heard about him in a lecture yesterday.” Excuse me?

He went and found his young colleague, Robert Riemer, who just the day before, as part of his doctorate program, had given a talk entitled “Reforming the Slave Economy”. I never did quite grasp the benefit of discussing what the economic future of the American south might have been had the Confederacy won the war, but in any case Edmund Ruffin, because of his contributions to the agronomic prosperity of the south and the books he wrote on things like crop rotation and soil management, figured prominently in Riemer’s lecture. A young history professor-in-training way up here on the Baltic Sea in the former German Democratic Republic, and he knew more about Edmund Ruffin than I did.

And how about the timing! This wasn’t two years ago, or six months ago, it was yesterday! Life is sure interesting sometimes. 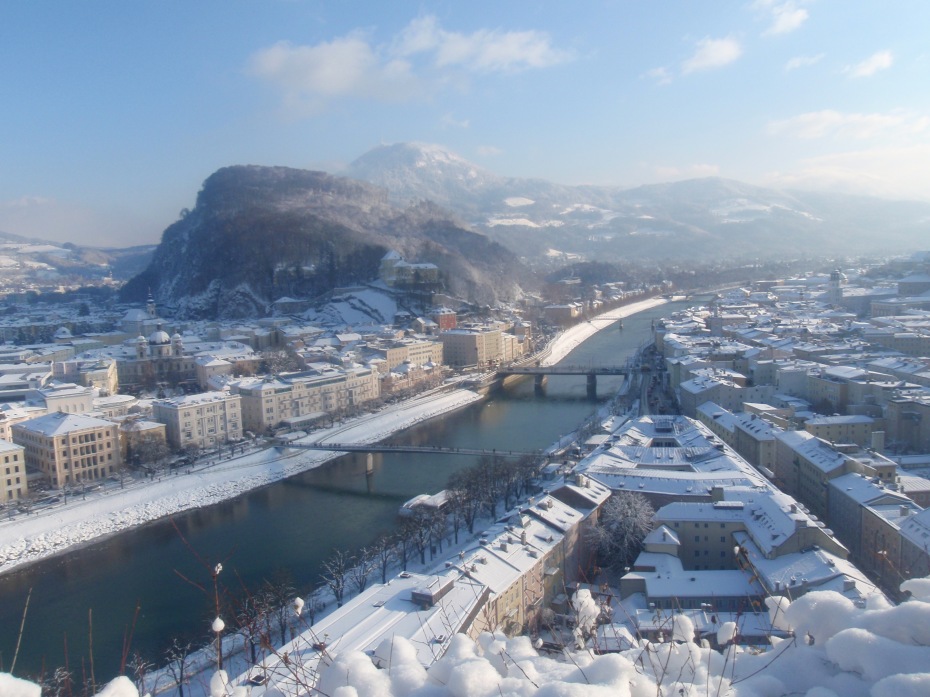 Overstaying my welcome.  About a week before I left for Turkey a met a guy in a bar who told me that there is a 90-day time limit for staying within the European Union. His American girlfriend had flown to Salzburg from California and because she had previously violated the deadline by just three days, she was not allowed into Europe; they held her for a day at the Salzburg airport before sending her back to the States. I had already been in Europe around 120 days. “They’ll let you out, but you won’t ever be able to come back,” he told me. Ever? Seems a bit harsh.

I didn’t think about it again until I was at the Munich airport this morning, about to board a plane for Istanbul, and the lady at passport control started taking longer than usual.

“When did you come to Europe?” she asked.

She flipped through all the passport pages again. “And where did you enter Europe?”

She kept looking for the stamp that would bust me, and then called over the guy from the next booth. He scanned the passport for a minute before saying something that I assumed was along the lines of “screw it, let him go”, because she did.

Turkey is in Europe, at least the half where I’m landing. I may have to bluff my way out of this again.

Conservation. When it comes to energy conservation Europe is many kilometers ahead of the United States. So many sensible practices are just ingrained in the culture and part of the day-to-day routine.

Every car here has a manual transmission, and all the cars I rented used diesel fuel, a bit more expensive but much more efficient. People turn their engines off at red lights (diesels shut down automatically in neutral). In hotels you need your room key to turn on the lights, so you can’t leave them on when you go out. Lights in many places are movement activated and shut off when none is detected. Escalators go one-third speed when there are no passengers. Toilets have two flush buttons, a smaller one for water only. Mass transit is efficient, affordable and widely-utilized. Recycling goes without saying. Signs of alternative energy in the form of wind turbines and solar farms are everywhere. It’s impressive.

Music. While on crutches for three weeks in September I didn’t go out much and became addicted to YouTube as an amazing source of music; you can stumble upon remarkable clips there from past and present, and from time to time I may throw a link on here to something interesting.

The first one is personal, a major source of my love for music. I first heard this version of this song on a transistor radio while hiking through the woods at camp one summer in the early 60s, and thought it was the most beautiful thing I’d ever heard. Still do. And while I didn’t really understand the significance of the lyrics at the time, they clearly had meaning beyond the moon/June love songs that dominated top-40 radio. So grab some ear buds and see if this brings back a memory or two.

Weather permitting the next post will feature photographs of a very dramatic place: Cappadocia.